Gearing up for the spring hawkwatch 2012 in Veracruz Mexico

I have been putting the finishing touches on my spring 2012 Hawkwatch tours here in Veracruz. I have selected  4 locations. Tour dates are April 6-14 April 16-24.   Yesterday I was up on the ranch and I observed territorial behavior with one of the Aplomado falcons (it chased away a Caracara on the neighboring property) I think that the pair have a nest started already!  I will check it out later this week.

I am inviting birders/hawkwatchers everywhere to come down and experience the spring raptor migrations.
for more info contact me David McCauley  hawkwatch@gmail.com

Posted by Unknown at 9:29 AM No comments:

I am trying something new in 2012, a spring hawk watch in Veracruz that incorporates birding, hawk watch, natural tropical gardening/farming (making a compost), a cheese making class (mozzarella and ricotta) a couple of Mexican cooking classes, tree planting up on the Aplomado ranch. All of this in the beautiful setting of the Huasteca foothills and mountains. On this 9 day 8 night trip we will experience the marvel of the spring raptor migration, do some tropical birding and experience my project up on the ranch/garden in sustainability and work with local families in a rural/agritourism project. 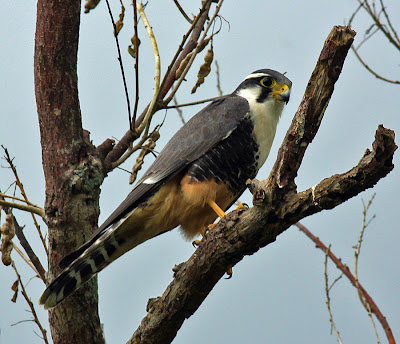 I have selected two dates for the spring tours.April 6-14April 16-24The cost for the 8 night 9 day  tour is $1,200 USD per person.Each tour will be limited to 6 persons. The tour will begin and end in Mexico City ( we will travel by first class bus to Cerro Azul)
Posted by Unknown at 12:03 PM No comments:

Why I love the hawkwatch 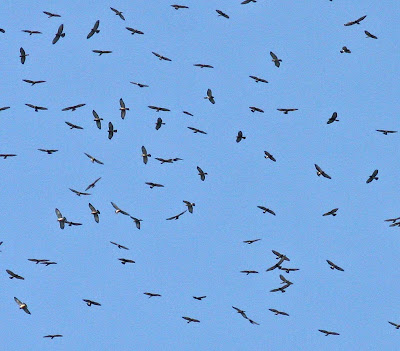 I have been watching hawks and migrating birds of prey for about 14 years. Observing hawks in migration never gets old for me. I was living in Veracruz Mexico when I observed my first swirling kettle filled with thousands of Broad-winged hawks. This migratory experience captured my imagination, it was and still is magical to observe. Every year for the past 14 years, I participate two times a year (spring and fall) in the "ritual"of the hawkwatch.
The dynamic of observing migrating raptors is constantly changing. One moment you can be observing distant "raptor specks" as they navigate their migration and the next capture a fantastic view of a low flying hungry juvenile Cooper's hawk in search of food.  The visuals of the bird of prey migrations are constantly changing. I have been fortunate enough to lead birding tours over the past years to share this phenomena with many people.
For the past few years I have teamed up with Simon Thompson of Ventures Birding Tours to conduct a  fall tour of the peak of the raptor migrations in Veracruz.  Going birding with Simon is a lot of FUN. His knowledge and passion for birding is top notch. This year both Simon and myself want to invite birders everywhere to  experience the Veracruz Hawkwatch tour. The date for the first tour is September 26- Oct.3 and the second tour is Oct. 3- Oct 10.  For information http://www.birdventures.com/ 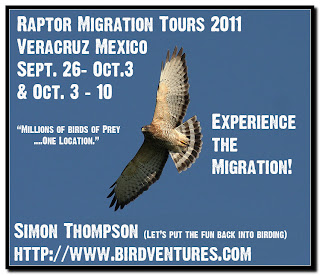 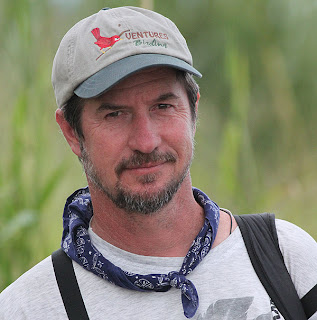 Paso de Ovejas Veracruz. Wish you were here. I have been observing  raptor migrations for about a week now. No heavy movements so far...mainly TV's. Yesterday I spotted 120 high flying Mississippi kites. Today I had my first accipiter, a Cooper's hawk. Have seen several Ospreys.  As for migrating aquatics...... beautiful swirling clouds of Anhinga. 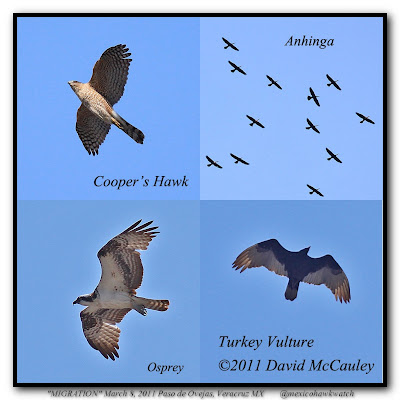 I have been going out early for general birding (I got 55 species in two hours the other day.
Here a a few pics of species that I have photographed recently. 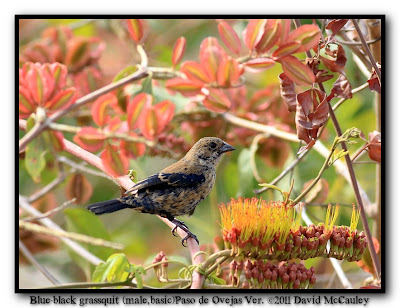 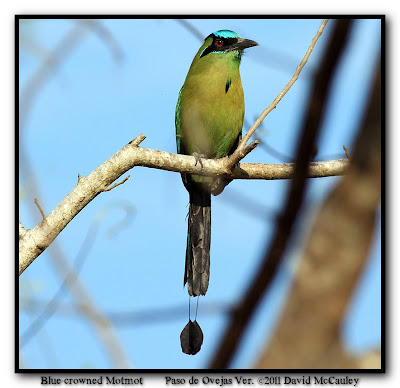 I will be keeping you updated here as the migration continues.  Twitter  @mexicohawkwatch
Good birding All.
David
Posted by Unknown at 7:14 PM No comments:

The Laughing falcon can be found in Veracruz Mexico....  this Falcon has a far carrrying laugh and as one gets close.... its head bobs. The falcon does not soar in thermals, and is most often seen perched. Its primary diet is snakes. here a a few pics that I have taken of the Laughing Falcon. 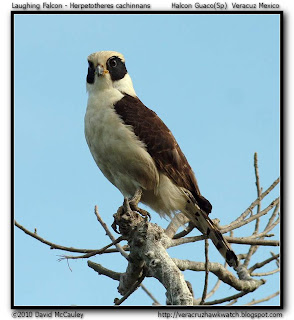 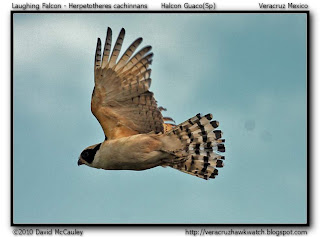 Spring Hawkwatch  tour...Veracruz April 12-21
mexicohawkwatch@gmail.com   contact me for details.
Eyes to the sky,
David McCauley
Posted by Unknown at 3:05 PM No comments:

A "blizzard" of migrating raptors.

October fifth and I am standing on a ridge looking to the north in Paso de Ovejas Veracruz. 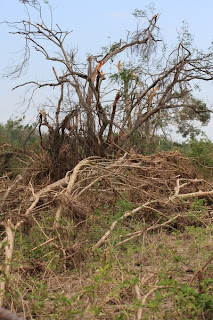 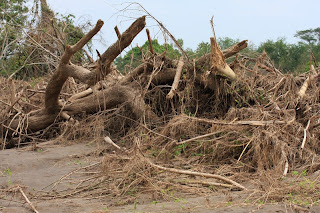 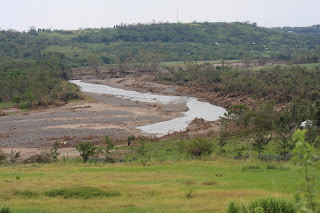 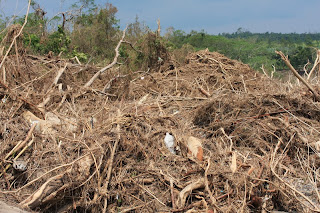 As i scan with the binoculars I spot broken limbs and downed trees everywhere. All the damage being the aftermath of Hurricane Karl. The area of  La Antigua, Cardel, Paso de Ovejas, Chichicaxtle, Salmoral....... suffer one hell of a beating. Winds over 200 kilometers per hour.  The winds, flooding and general destruction have left the people stunned..... just now they are beginning to regroup and put the pieces together. I spend a lot of time in the field and the scope of the destruction is massive.
The raptor migration continues 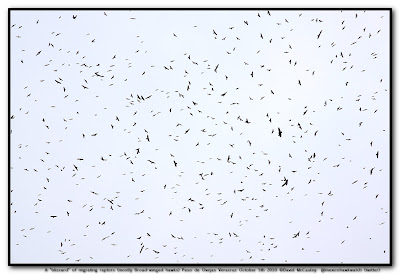 Posted by Unknown at 7:59 AM No comments:

From the kettle to the kettles.. my first (of the season) Broad-winged hawk sighting in Veracruz

The date: September 20th
Location: Tamalinillo, Veracruz Mexico
Hurricane Karl left us with a lot of moisture here in Veracruz.

The rains ceased on the 20th, the heat and humidity was crazy. The small rural community of Tamalinillo Veracruz was preparing for the festival of Saint Matthew. Early in the morning on the 20th a hog was butchered, by the time I got up the fire was going strong with a big kettle of boiling lard.
The pork fat and rinds were cooked up first and later, meat was added until all was cooked. 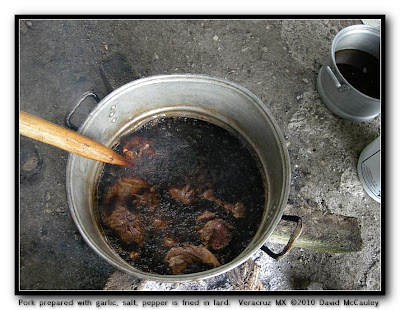 You take this fried pork (while its still hot) and chop it up a bit with a knife put a couple of chunks on a fresh corn tortilla add some home made salsa,  and you have some fine dining. Wash down five or six of these tacos with some cold Tecates and life is indeed good!
I had just finished eating, it was about 2pm and I spot some movement in the sky to the other side of the valley....a "kettle" of Broad-winged hawks - Buteo platypterus. These are my first BW's of this season here in Veracruz. I feel the rush of adrenaline as a race to get the camera. Below is a view of the hawks in a thermal or "kettle". A "kettle" is a column of rising warm air, when the raptors enter the column of rising warm air they soar in spirals to gain altitude to continue their migration. This soaring spiral of hawks, in great numbers, gives the effect of water boiling in a kettle. 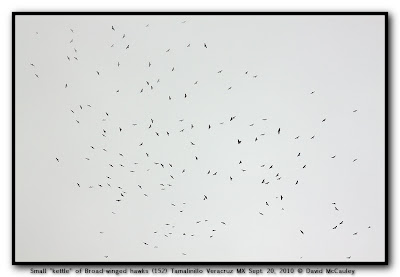 Here is another view as the Broad-winged hawks as they leave the "kettle". The wing shape changes to glide and the appearance is one of uniformity, another name for this gliding flight pattern is called a "stream" or a "line". 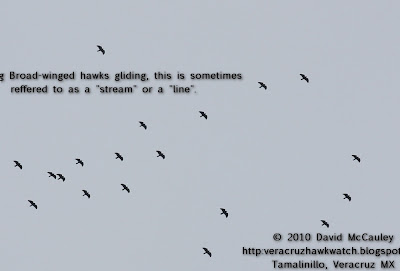 I counted approximately 1,800 Broad-winged hawks in about an hour.
Posted by Unknown at 3:17 PM No comments: